i haven't decided yet how i feel about the phrase "hunker down," but i just saw someone on cnn use it with a straight face.

but that's what i'm doing. we're officially in the zone for "hurricane force winds" of 75+mph. the wind is starting to pick up, and it feels weird because it's from the north. you wouldn't think that would be a big deal, but it feels all wrong. the trees look funny, like they're not used to bending that way. the animals are acting weird. the rooster has been crowing all day, and the goats are bleating and restless. justin is letting them into the backyard so they can "hunker down" on the back porch. their barn isn't built yet. this morning we had scores of birds in our pond, fleeing from somewhere. 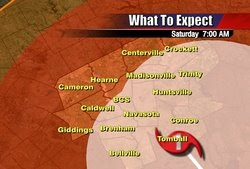 i was going to load up on flashlights, but heb was sold out of everything except "high school musical" flashlights, so i've got five of those.

it is nice to live close enough to watch houston news. it's been live coverage all day. it's strange to see galveston, where i've been a thousand times. the street that my mil used to live on is underwater; i saw her building on tv.

well, i'd better go fill up the bathtub. i'll post in the morning if i have electricity.

Buzzwords for Ike on the news: "Hunker Down", "Hunkering Up", "Destruction", "Devastation", and "Catastrophe".

sweet that you scored some high school musical flashlights! hang on to those things, surely they'll be worth something one day :)