Snake in the Pantry

You've heard of Snakes on a Plane, but now I bring you....

Snake in the Pantry.

I kid you not.

Sunday night, I was getting ready for a bedtime snack of waffles (I know). I pulled out the waffle iron and then.....gasp: 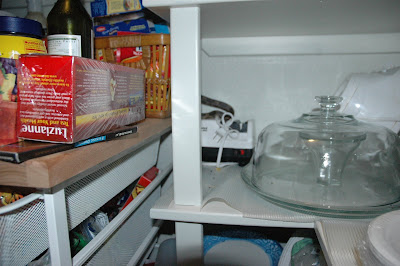 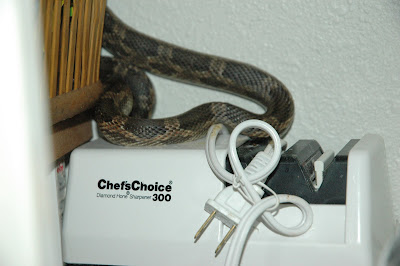 It was coiled up behind the waffle iron, on the knife sharpener. Scared the pee out of me.

I did what any self-respecting, capable and competent adult woman would do.

"Honey, there's a snake in the pantry. You have to get it out."

Y'all, my husband is a brave man. He really is. But....not so much in the snake department. Justin was, shall we say, a bit apprehensive about fetching the snake for me. My mother-in-law was there, and she also was completely useless. (I love you guys, I really do. Even if you are useless when there's a SNAKE IN THE PANTRY.)

I should clarify. Justin was willing to get the snake, but not in a manner that I was willing to endorse. He was all ready to get the hoe and start chopping, but I put my foot down. I will not, WILL NOT clean up snake blood from all over the inside of my pantry. I WILL NOT have hoe chops and blood stains on my new wood floor.

Hubby was less than enthusiastic about my proposal of BBQ tongs, so I was on my own.

Let me tell you, I got that bad boy. I was already in my bathrobe (see "bedtime" above), so I added boots and the one leather gardening glove that I could find: 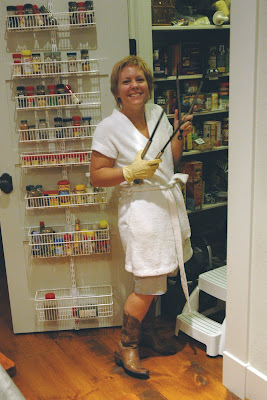 (disclaimer: This picture is a reenactment, taken after the fact. Note the carefree laugh.)

I pinned him once with the tongs, but he wiggled out. He then proceeded to crawl all over the pantry, in and out of drawers, eventually settling in the corner behind the crock pot. When Justin pulled out the crock pot (with a ten foot pole), he coiled and hissed at us. Eventually I managed to pin him down with a drawer that I yanked out on his head and grabbed him with two pairs of tongs and threw him in the trash can. He was jumping around in there like crazy, trying to climb out, while I ran across the kitchen with the can, trying not to fall down in my cowboy boots. I kept knocking him back down with the tongs, and yelling "Open the door! Get out of my way! Open the door!" I threw the whole can out the back door, where the kitty Tiger took him down with relish.

Looking back, we probably could have killed it with a hoe without too much bloodshed. Maybe we'll try that next time.

That's a Bullsnake. They are very friendly and they eat mice. You should let him stay in there.
We had one living on the porch.

oh no you didn't just say that to me.

i will not tolerate infestation.

i shouldn't be surprised; he does nap with goats. from there it's not far to "pet snake on the porch."

Thanks for the honorable (er uh, dishonorable) mention. I definitely deserved it. I will forever substantiate that you are the best pantry snake hunter in the world!

oh man- i've been waiting for this post. hilarious! and i can say that because i wasn't there. you are so cute in your robe and boots- i mean brave...

Oh my! I read this post last night before bed.....which was a huge mistake. I couldn't quit thinking about it. Here are some things I pondered laying in my bed last night. I'm sure you have been too.

- How did the snake get in?

- How long has it been there?

- Did it crawl on you while you were sleeping?

- Are there more of them?

- What if it would have been in the potty when you were trying to use the restroom in the middle of the night (HUGE FEAR OF MINE)?

I can't even begin to describe how amazing I think you are. We tore down a whole entire building out here because we found a snake in it. Yep. You read that right. I am terrified.

here are my thoughts:

i think it came in the garage. the door from the garage to the house does not have a good seal like an "exterior" door. that will soon be remedied. or it could have come in a back door; those are occasionally left open for a few minutes.

i think it came in for two reasons:

1. mice in the pantry. i put traps all over the pantry and i've caught 3 in two days.

2. the storm. i choose to believe that it came in saturday or sunday because of the rain.

no, it did not crawl on me in my bed, and no, there are not more.

i have to believe that.

I am not believing how brave you are...I am still screaming on the inside. There aren't enough shivers to get over that ordeal! :))

And let him stay there? What. Ev.

The only good snake is a dead snake.

I just popped by your blog from Femina. I had to comment here....and share that I once found a tarantula on my kitchen counter...sort of similar to your moment there.